Tesco boss Dave Lewis has hailed the work of the grocer and its suppliers in keeping a lid on inflation, despite currency headwinds. 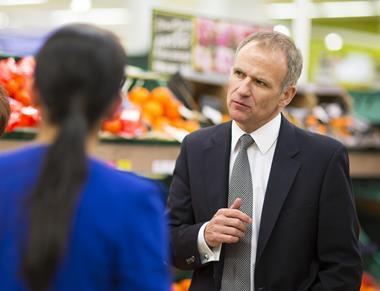 The supermarket giant has been battling to minimise price increases at the shelf edge amid a fall in the value of the pound, which has caused a spike in sourcing costs.

Lewis said inflation at Tesco during its first quarter – the 13 weeks to May 27 – was “significantly lower” than the rest of the grocery market, helped by the work of its “pragmatic and action-orientated supply base”.

He said those efforts were crucial in driving a sixth consecutive quarter of like-for-like sales growth of 1% across the group and 2.3% in its core UK business.

Speaking after unveiling that latest trading update this morning, Lewis said: “A key focus for this quarter has been working with our supply partners to protect our customers from inflation.

“Today’s numbers show the benefit of our approach.”

The former Unilever executive added: “We think that the only thing we can do, and the thing we should do, is keep investing in supporting our customers at a tough time. That means trying to offset the inflation that comes.

“The inflation at Tesco is significantly lower than what we see in the market and we think that’s the best way that we can contribute to helping customers in what is clearly an uncertain time for them.”

Despite driving an impressive turnaround effort to date at Tesco, Lewis was targeted by the Pensions & Investment Research Consultants (Pirc) last week.

The group hit out at the £142,000 he was paid in relocation costs to move from London to the Hertfordshire area, closer to Tesco’s Welwyn Garden City head office.

The grocer is braced for a potential revolt from investors at its AGM this afternoon over the pay package.

It comes after its big four rival Morrisons suffered an investor backlash yesterday when almost half of its shareholders voted against David Potts’ pay.

The former Tesco executive was handed an increase in his long-term incentive package, growing from 240% of his salary to 300%.

But ahead of Tesco’s meeting this afternoon, Lewis defended his relocation deal and insisted the contract he was handed by the board was “exactly the same” as a store manager would receive.

Lewis said: “We move a lot of people around – store managers in particular tend to be more mobile and we move them around the country.

“The policy we have around that is to pay the legal fees, the stamp duty and, for some people, their removal costs and a couple of other disturbance allowances.

Tesco’s AGM could prove a fiery affair, with questions also likely to be asked about the grocer’s proposed £3.7bn merger with wholesale titan Booker.

The meeting kicks off at 2pm.