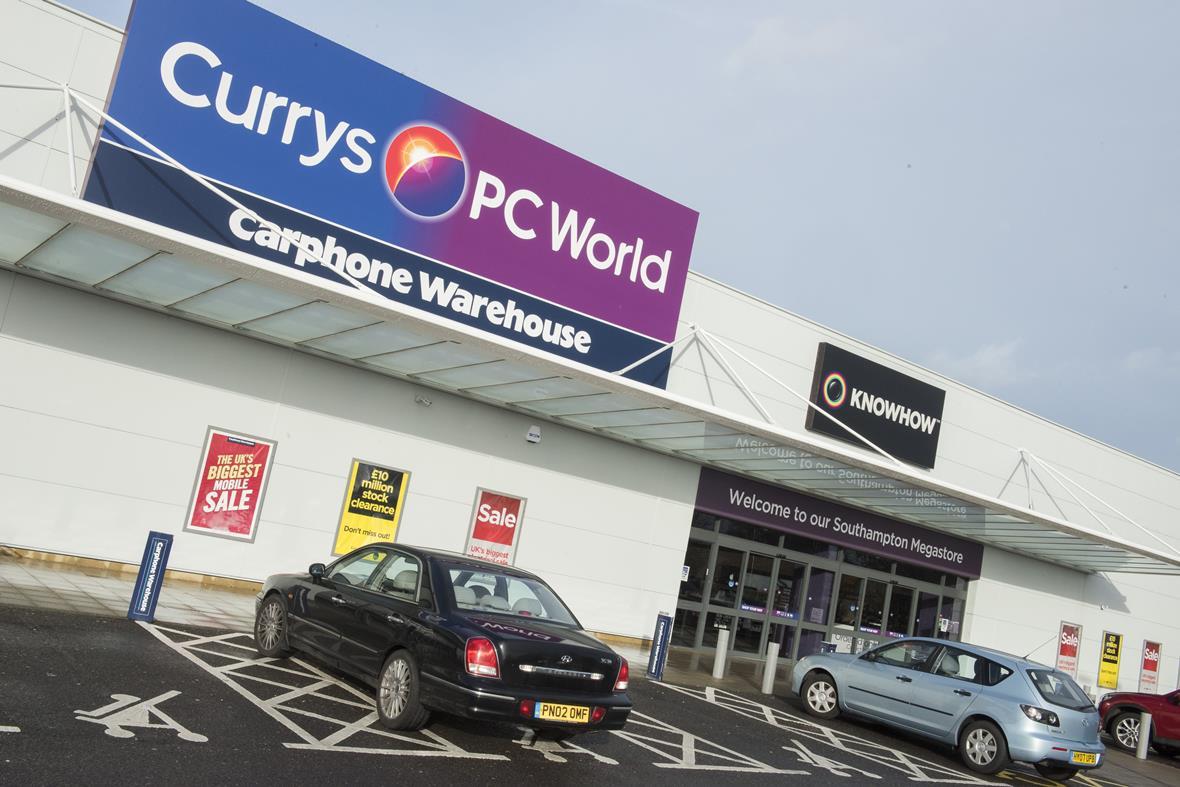 He pitched aspirations to “reinvent retail as we know it” and outlined plans to create a pay-monthly membership model.

Speaking to Retail Week at a tour of of the business’s largest 3-in-1 store, James says the emergence of a new Zeitgeist has captured his imagination.

He cites firms such as Rent the Runway, Zipcar, Airbnb and Uber as evidence of a burgeoning sharing economy.

“If it’s true, it’s my job to ask: how we can be at the forefront of it? And people laugh at me but: how can we end up making Amazon redundant?”

The key for James is leveraging Dixons Carphone’s unique assets – the things it can do that Amazon can’t.

“We can both stock and sell and deliver goods. But I can install. I can protect. I can finance. I manage reverse logistics. I can trade in. I can re-sell.

“If I bundle all that together into a package that includes connectivity, content and everything else, can I do something Amazon will never be able to? I think the answer is yes.”

But James’s retail paradigm remains on the horizon for now and the retailer, which only merged in 2014, has a busy year ahead of it.

Before Dixons Carphone comes close to launching its membership scheme, the retailer has to put all the bricks in place.

“2017 is about knitting the pieces together in bundles, to see what’s attractive to the customer,” James says.

On top of the “everyday stuff”, James’s to-do list includes completing the build of its final few 3-in-1 stores, digitising the customer journey in its computing division, growing its phone network ID, and “getting the Carphone store estate right”.

As a result, some of its 703 Carphone Warehouse standalones have become surplus to requirement, and the firm’s plans to shutter a chunk of them will soon kick off in earnest.

Carphone Warehouse boss Jeremy Fennell admits things are about to get “more serious” in terms of rationalising the estate.

He points out there are 140 standalone stores on retail parks where there are also now 3-in-1 stores, and another 50 nearby on arterial roads.

“These will be the first ones we look at taking out as quickly as possible,” Fennell says, explaining, however, that the decisions will be based on more than just proximity.

He says the closure programme will ramp up in the retailer’s next financial year following a lengthy period of consideration.

The remaining standalones will then be refurbished to match the new-format Carphone Warehouse stores that have opened in Stratford and Swindon, and where, James says, sales are already up 14%.

At Dixons Carphone’s Christmas trading update, James said the trial of its expanded services proposition in Leeds was going well.

Consequently – and with former Telefónica UK sales and services director Feilim Mackle in tow – the retailer intends to start rolling out its new, improved services offer nationally this summer.

Stores will install KnowHow ‘super clinics’ with on-site engineers, and same-day iPhone and computer repairs will be available.

“Our repair proposition will change dramatically,” James says, “and KnowHow will be totally rebadged and rebranded”.

The retailer will also work to expand its new flexible credit financing proposition – Your Plan – and grow its broadband switching service Multiplay.

On its mission to become a true triple threat, Dixons Carphone will also continue to bolster its multichannel offer.

The retailer is adding numerous features to its web platforms, including new payment methods, enhanced click-and-collect and delivery options and a richer mobile experience.

Meanwhile, it is preparing to shut down its PC World website, bringing its electronics offer together on one platform as it continues to integrate the brands.

James is also eager to optimise Dixons Carphone’s delivery service so it might keep up with the likes of Amazon Prime and Argos’s Fast Track.

His initiatives for 2017 include expanding same-day delivery, offering shorter delivery slots and allowing customers to order up to midnight to get next-day delivery.

Despite his bold ambitions to “reinvent retail”, James isn’t blind to the incumbent threat of Brexit, as the vote’s consequences begin to bleed into the retail industry.

“The Brexit vote has caused a big challenge around foreign exchange rates, and we’ll have to watch closely to see how that plays out,” James says.

“We feel comfortable but, in some products, prices will definitely move.

“We’ve seen it already with Apple, but interestingly people are still buying it. There’s been some decline – it’s proper wonga now – but the drop-off hasn’t been massive.”

James also points out the potential challenge of consumer confidence: “So far so good, but we don’t know yet what’s going to happen, or how shoppers will react to price changes across the industry.”

What’s in a name?

James clarifies that the creation of a membership model will be “gradual”. But when it does finally launch, he promises it will have a shorter, “sexier” name – “not least of all because Currys PC World Carphone Warehouse would require a very long membership card”.

He implies the scheme might adopt the firm’s KnowHow banner, and tantalisingly adds: “Five or six years down the line, I’m sure there’ll be a more elegant name for Currys PC World Carphone Warehouse stores too.”

But, even if James ticks off everything on his 2017 to-do list, taking the fight to Amazon won’t be easy.

With the news of Amazon eyeing physical store space in London, it’s clear the internet giant continues to have big ambitions of its own.